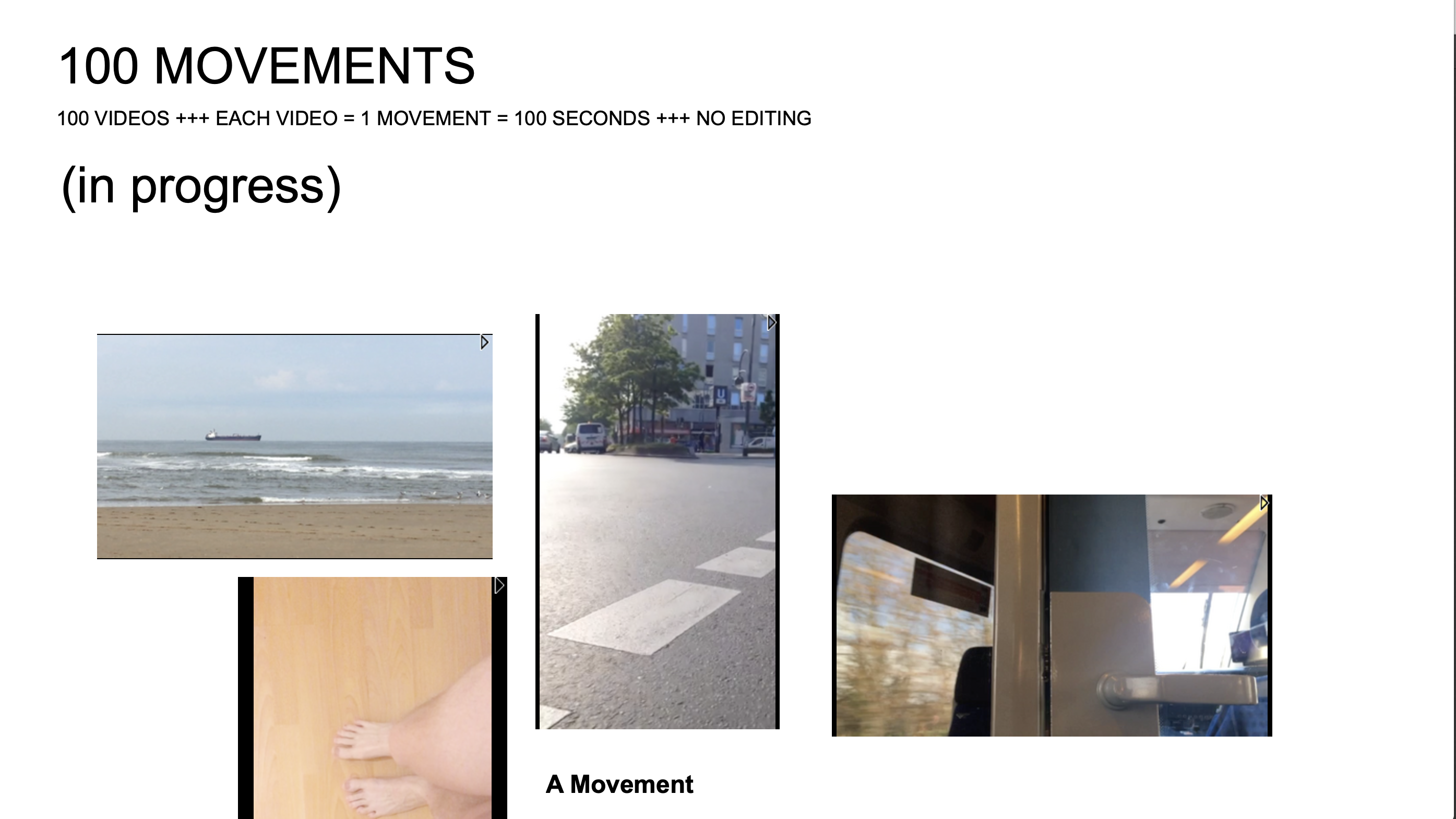 Link to project on Research Catalogue

"Movement has an essential relation to the imperceptible; it is by nature imperceptible. Perception can grasp movement only as the displacement of a moving body or the development of a form. Movements, becomings, in other words, pure relations of speed and slowness, pure affects, are below and above the threshold of perception." (Deleuze and Guattari, A Thousand Plateaus, 280-281)

This is a research project on the question What is a movement?
It uses videos, exactly 100 seconds long.
Without editing.
Only one rule structures the videos: Film one movement for the entire length of the video (100s). Just one.

First this rule seemed to be simple. After the experience of the first video it wasn’t anymore.
Trying to film a movement immediately show how many movements surround us. We live in an “ecology of movement”, a word brimming with speeds and slownesses, with rhythms and momentum. And none of these movements can easily be separated: they condition each other, inflect each other, interfere or resonate with each other. Most of the time one cannot even say when one movement starts and another ends. Is movement even linked to displacement? Is it performed by onebody? Or by multiple bodies? (Is this still one movement?) What about the water in the sea? Does water move with the waves? And does it stop moving when the waves break ashore?
And still, more than often we speak of a movement (a glass falls of the table, a train going from Berlin to Hamburg, the earth circling the sun). But what is “a movement”? One thing is certain: One movement – its trajectory, its start, its end, its speed and so on – is not simply “out there”. Movement needs to be produced. From the brimming world of movement, a movement must be synthesized.
And while the project started with the question: What is a movement? it soon became interested in the question: How is movement synthesized? How does one movement emerge from a world of movements? How does the synthesis of movement work? What are the means of its synthesis? Which techniques exist to produce a movement? Time? Space? The unity of the moving object or body? Or the subject ‘performing’ this movement?

The videos stem from the collective research on movement in the frame of several seminars held at the Institut for Applied Theatre Studies at the Justus-Liebig-University, Giessen and elsewhere. They were filmed by students and myself. They are tools of teaching as well as of research. Each of the contributions follows the question of movement in manifold ways. And while the rule always was “Film one movement!”, you can already state: none of the videos shows only one movement. Yet all of them show one movement at least 100 seconds long.